All games will be played under FIFA rules (as modified by US Club Soccer/USYSA/AYSA) unless otherwise stated herein. The 2022 program rules supersede earlier published rules versions. The Tournament Director or designated member or members of the Discipline and Rules Committee will settle all disputes. See your Site Coordinator for contact information. Tournament rules may be modified under extraordinary circumstances as deemed necessary by the Tournament Director or designee. No protests will be accepted or considered.

Any questions regarding the rules of the tournament or challenges concerning the eligibility of a player should be addressed to the Tournament Director at Tournament Headquarters prior to the beginning of the game.

At this time we are no longer offering refunds. We understand that situations arise that may require a team to withdraw, so for covid reasons we will provide a 50% refund, or full credit towards next year’s tournament, with confirmation of covid reporting with ASA our governing body.

The Strikers Cup will be following Covid protocols per our governing body ASA. These policies and protocols are ever evolving, and are subject to change.

Tournament check-in will be online.

Check in instructions are located on the FC Tucson Tournament website.

If player has a soft cast, must have a doctor’s release and approval from the referee to play. HARD CASTS will be evaluated and the final decision will be made by the referee. If the CAST can be wrapped and protected it may be allowed. NO jewelry is allowed including taped earrings. Players not in compliance will be CAUTIONED (yellow carded) and sent off the field until the requirement is met. 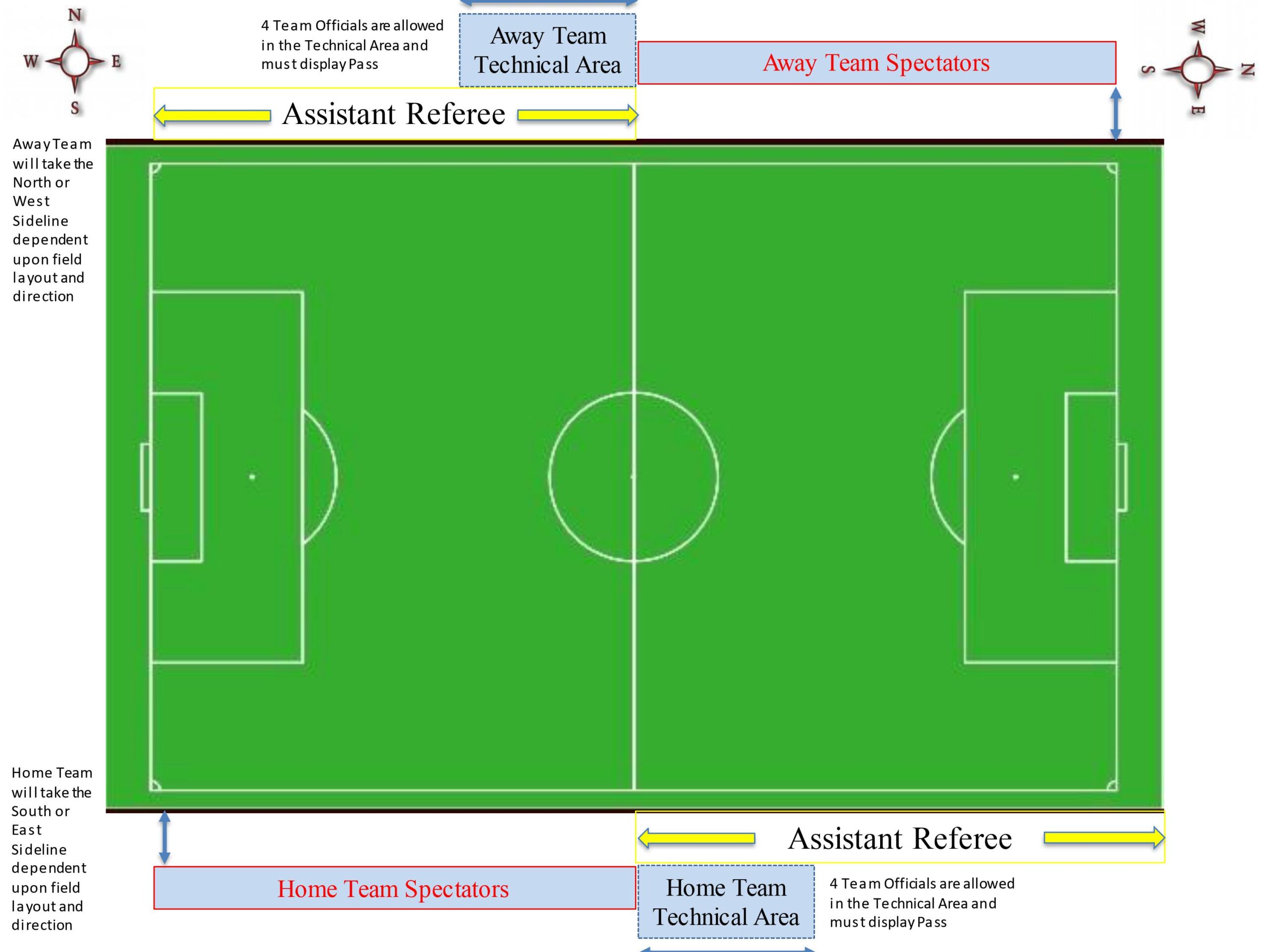 Half-time breaks will be exactly five (5) minutes long. The referee may start the clock for the second half if, in his or her opinion, there has been unnecessary delay.

For U15-U19, all eligible players on the player roster (max 22) can play in all tournament games.

All Head coaches have total responsibility for the conduct of their assistant coaches, team officials, players, and spectators at all times. Coaching from the sidelines (giving directions to ones own team on points of strategy and position) is permitted if:

Both coaches will sign the match card in front of the center referee, when the match is finished, attesting to its accuracy. The Head coach or Team manager is responsible for picking up players passes after each match.

If a player is rostered on more than one team, that player may only play on one team during the term of the tournament.

Teams failing to report ready to play within (5) minutes of scheduled kick-off time may forfeit their match. All teams must have a minimum of (7) players present to start the match, with the exception of 4v4 matches. Teams who have forfeited may continue on in the tournament.

All referees working this tournament must be certified by the Federation. All referee decisions are final and not subject to appeal. The center referee will fill out the match card and give it to the Field Marshal/Site Coordinator immediately after the match is finished.

Referees will be instructed not to add time to a match except under the most extenuating circumstances. However, all preliminary matches will be terminated not less then (5) minutes prior to the scheduled start of the next match.

Any athlete suspected of sustaining a concussion or head injury shall be immediately removed from tournament play and not permitted to return until he/she has received written clearance from a licensed Medical Doctor (MD or Do). Clearance by Physician Assistants, RN’s or LPN’s will not qualify for state policy. This policy is in conformity with AYSA policies. Referee will note on the game card that player suffered Head Injury and was taken out of game. Player pass will be pulled from ring and along with completed injury report given to the site coordinator. The site coordinator will give the player a form to be completed by an MD or DO only. Players cleared before the end of tournament, must bring their written clearance to a tournament official (the site coordinator) before resuming play. If the athlete is not cleared by the end of tournament, the player pass will be sent to state AYSA office.

Unlimited substitution will be allowed in all age groups, with the Center Referee’s permission, and only at the following times:

Note- If coach goes onto pitch to tend to a player, that player must leave the field until the next stoppage.

Teams shall be awarded points for match results as follows:

TIE BREAKING WITHIN A POOL

Ties in pool standings will be broken by employing a tiebreaker.

PK Procedures – Only the (4) U7-U8, the (7) U9-U10, the (9) U11-U12, and the (11) U13-U19 players on the field at the conclusion of regulation may participate. The Center Referee will gather all the players on the field at the end of regulation time and not allow them to go to their respective sidelines. They are the only players who will shoot the PK’s. After the initial (5) PK’s are taken and there is no winner, each team will take an equal number of PK’s (one for one) until a winner is determined. If need be, all (11, 9 or 7) players will be used and then each team will begin again in the same order they started in.

AYSA rules prohibit any coach, team official or player ejected from a match, or suspended by the proper authority, to be within sight or hearing distance of the field of play during his/her suspension. A coach, team official or player receiving two cautions (yellow cards) in a single match is considered to have been given an ejection (red card). A player who has been ejected (sent off) shall not be replaced. Players and/or coaches receiving a red card will be ejected from the game and will not participate in the next scheduled game and other penalties may be assessed depending upon the offense. The player pass will be held by the Discipline and Rules Committee at Tournament Headquarters until the player is eligible to play again. Last-game red cards will be referred to AYSA (the “State Association”) for in-state teams. In addition, leagues may be advised of the offense.

The Tournament Committee has the authority to alter the schedule, move matches to the next day or move match sites for the good of the tournament. All matches will be played if at all possible.

Matches will be played in all weather conditions, unless the City of Tucson, Pima County Parks and Recreation, Center Referee, or Tournament Director determines the conditions are dangerous and/or life threatening as per FIFA/USYSA/AYSA regulations or may cause severe damage to the fields.

All decisions made by the tournament Directors

Plan A: Tournament start time will be set back the number of time slots required.

Plan C: Plan B plus shorten all second round matches the same as Plan B.

Plan D: Plan C plus shorten all third round matches the same as Plan C.

Plan E: In the event the fields become totally unplayable or the weather becomes a safety risk, it may be necessary to decide some matches with FIFA penalty kicks or cancel the tournament play and send the teams home. Tournament placement will be determined by standings at time of tournament stoppage.

All disputes shall be settled by the Tournament Committee and their decision shall be final. Disputes that will be heard will include player eligibility and tournament rules ONLY! Disputes must be turned in within 20 minutes after match is terminated with both coaches signing the match card that there is a dispute. The dispute will be adjudicated within 20 minutes for a total of 40 minutes after match is finished. Only one (1) person representing the team in dispute will be allowed at the Headquarters tent. NO protests or appeals will be allowed. NO refunds will be issued for any reason after the tournament acceptance letter has been emailed.

All players will receive a participation pin. First and second place medals will be awarded to all winning teams in each flight immediately following the championship game. If a flight does not have a championship game and is decided solely on points, medals will be awarded following the last game of flight play. Awards will not be mailed to teams failing to stay for presentations. Please pick up your medals before leaving the field.

Once a team is accepted to participate in the FC Tucson Striker’s Cup Tournament, they shall agree to release, hold harmless and indemnify the Tucson Soccer Academy DBA FC Tucson Youth Soccer Club / Arizona Youth Soccer Association / Pima County Junior Soccer League/ The City of Tucson (and their field complexes) / Pima County Parks and Recreation (and their field complexes), and all of the Board members, officials, coaches, referees, medical providers, sponsors and their employees, agents, officers and directors of the aforementioned entities from any and all liability for injury, or damage to persons, property, or economic interests connected with or arising out of any action taken by them in good faith or out of any failure by them to act. In the event of inclement weather or other uncontrollable force of nature or event, the Tournament Director, the City of Tucson, and Pima County Parks and Recreation shall be the sole and exclusive judge of whether the tournament shall be held, canceled, continued or postponed and we hereby release the FC Tucson Striker’s Cup Tournament and all of the persons or entities mentioned above from any and all liability for direct or consequential damages resulting from the exercise by them of such judgment and recognize and accept all decisions of the tournament as final without objection, appeal or compensation whatsoever. We certify that each player registered by us for the tournament is covered by an approved insurance plan. Payment of entry fee and acceptance to tournament constitutes acceptance of: Release of Liability, tournament guidelines, format and Tournament Rules.

NO Alcoholic Beverages, illegal drugs or glass containers allowed in complexes.
NO Smoking at or near the tournament fields/concessions.
NO pets/animals will be allowed at the Complexes.
Please pick up trash at the end of your matches.
HAVE FUN AND GOOD LUCK!